The Abe Forum: Brought to You by Jerry and Esther Hicks

The Abe Forum does not disclose its connection to Abraham Hicks Publications.

*A special thanks to Ahnalira Koan for her help with this post.

The Abe Forum was created by David W. Gordon in 2007 as an online discussion board where Abraham Hicks fans could interact and discuss the Teachings of Abraham. With 10,796 registered members and nearly 1,000 active members, it is the largest Abraham Hicks fanpage to date. Since the forum's inception, its moderators have enforced strict guidelines that prevent members from discussing Jerry and Esther's personal lives, Abraham Hicks Publications' business practices, other New Age gurus, and any topic that may reflect poorly on the teachings. Most recently, to prevent a surge of comments regarding Jerry Hicks' death to leukemia, The Abe Forum moderators posted in bold letters: "Posts in the "main" forum, Abraham Teachings and you, are open only for that topic and not comments about Jerry."

The Abe Forum claims no affiliation with Abraham Hicks Publications, and moderators insist that their restrictions serve no other purpose than to keep the forum focused on its primary intent: "Abraham Teachings and You." But could there be more to the story?

In 2007, Abraham Hicks Publications had an official forum called Abraham Hicks Community Forums (not to be confused with the current The Abe Forum). Here's a screenshot of it from March of 2007:

The Abe Forum creator, Gordon, was a "Super Moderator" on this official forum. See the screenshot below:

According to Ahnalira Koan, "Webmistress" of the official Abraham Hicks Community Forums and 6-year Web Developer for Abraham Hicks Publications, Gordon was hired by the Hickses to moderate the forum. But in May of 2007, Esther saw a thread on the forum that she felt did not paint her in a particularly flattering light, and the Hickses demanded that the entire project be shut down. That same month, not-so-coincidentally, The Abe Forum was born. Below is a screenshot of The Abe Forum's "Welcome" message, posted on May 3rd, 2007:

Koan says, "Jerry and Esther did not own The Abe Forum, but my understanding is that they subsidized it. While I don’t know the exact deal they came to, I do know that as recently as last year, he [Gordon] was collecting monthly checks." If you look at the screenshots below, you will see that Jerry and Esther are even listed as registrants for domains (abraham-hicks.net and abraham-hicks.org) that link to Gordon's Abraham Hicks fansite, which in turn links to The Abe Forum.

From abraham-hicks.org registration (I have removed Gordon's personal information): 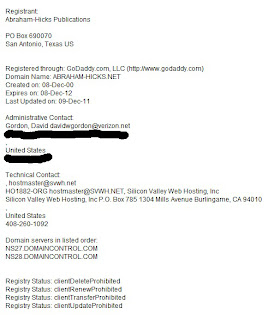