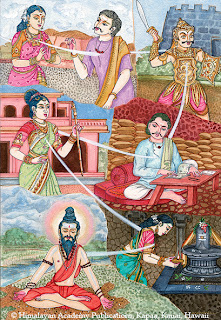 Adding to the case against Abraham Hicks, is this latest find, a revealing contradiction between two workshops, when Abraham is discussing the subject of reincarnation.

ABRAHAM: Their reincarnation occurs from the position that they hold from broader perspective. If their broader perspective is similar to their physcial perspective--and very often it is. Very often it is one in the same. In other words, if suddenly in an instant, POOF, there you go. It's not going to happen, but if you went this moment, you would not find yourself strangers to yourself. In other words, your nonphysical you would be very familiar to you. The desires--the desire--for freedom and growth and upliftment and joy that you feel fleetingly here, you would feel powerfully and you would recognize if you were to make that transition instantly. And so, for the most part, what you are living in this life experience, would not be so far from who you are from broader perspective. Which means very likely, if that is the way that they are approaching physical experience, that--you see the law of attraction is constant. It is the same in the physical or nonphysical--and so they would have that experience again.

North Los Angeles, CA, 3/22/03
ABRAHAM: Well, there is that. In other words, what you sow you do reap because Law of Attraction says that which you offer vibrationally is that which you bring back. But it does not pass on from lifetime to lifetime to lifetime in the negative sense that people mean because when you re-emerge into nonphysical, you re-emerge into pure positive energy, and when you come forth into your next incarnation, you come forth from that place of pure positive energy.

In the 1990 workshop, Abraham clearly says that the Bangladeshi people will reincarnate into a similar experience because their broader perspective is not far from the one they hold in the physical. In the 2003 workshop, they state that we re-emerge into pure positive energy and that this is the place that we reincarnate from. It will be fun to see how Abers reconcile this discrepancy...
Posted by kyra at 4:28 PM 1 comments

Did Jerry Hicks already know about The Law of Attraction?

Despite his alleged ignorance, it would have actually been easy for Jerry to have been aware of the Law of Attraction prior to he and Esther's experience with Abraham. As a self-professed fan of Napoleon Hill's Think and Grow Rich, it is likely that Jerry would have been exposed to Napoleon Hill's other bestseller, The Law of Success (1928), which repeatedly references the "Law of Attraction." Here are some quotes from The Law of Success:

"Remember that which was said about the Law of Attraction through the operation of which 'like attracts like.'"

"It is believed by men who have devoted years of research to the subject, that all energy and matter throughout the universe respond to and are controlled by the Law of Attraction which causes elements and forces of a similar nature to gather around certain centers of attraction. It is through the operation of this same universal Law of Attraction that constant, deeply seated, strong DESIRE attracts the physical equivalent or counterpart of the thing desired, or the means of securing it."

"Through the operation of this same eternal Law of Attraction he draws to himself the attention of people whose attitude toward life and whose dominating thoughts harmonize with his own."

In Esther and Jerry's 1989 book A New Beginning I, Jerry also admits that he was a fan of the work of Ernest Holmes and Charles Fillmore. Both authors discuss the Law of Attraction, by name, in their materials.
Posted by kyra at 5:35 PM 1 comments 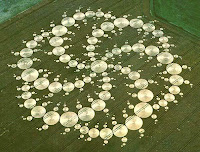 It's humorous to see how Abraham's answers have evolved over the years. Take a look at these conflicting responses. In a 1990 workshop (09/23/1990), a guest asked Abraham about crop circles. Abraham said that extraterrestrial beings were coming to earth and that "their intent is to interact with your planet in a way that they can glean some information. In other words, they are sensing from the very core of your planet as they sit upon it. They have chosen to set down in areas where they are not disruptive. And so their mission has many intentions all of it information gleaning and none of it intending to interfere or hinder your life experience whatsoever." They went on to say that the aliens were here to collect data, "of a seismic nature." 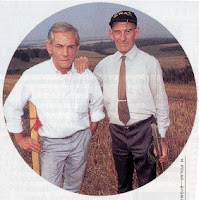 This answer was given in 1990, before Doug Bower and Dave Chorley came forward in 1991 and took credit for starting the crop circle hoax. Regardless of the validity of crop circles, Abraham has backed off their statement regarding alien visitors. In a 2004 workshop (07/03/2004 Alaska), they were asked again about crop circles. They made it perfectly clear that they were all "man made," without exception.

Almost as amusing as listening to Abraham's conflicting answers about things like crop circles, is listening to the excuses Abers use to justify these contradictions. They usually just blame the listener or questioner, as is appropriate in their victim-blaming philosophy. Because, of course, Abraham is infallible.
Posted by kyra at 2:28 AM 6 comments